Additionally, the electronic shutter behaves different from the mechanical shutter, not only in terms of maximum shutter speed, but also in terms of shutter movement. The shutter blades move the opposite direction, from the bottom up, as opposed to the electronic shutter, which emulates the mechanical but with a movement from the top down to the bottom of the image. This is clearly visible in flash images taken with shutter speeds above the maximum usable shutter speed.

The above is demonstrated in the following images. I used the V1-F1A adapter on the Nikon V1 which triggered an Olympus T32 flash in a grip, as seen in the image to the right. The grip is necessary because the flash is too heavy, so it is not suitable for direct use in the adapter. The test images are taken from about two meters and the test subject is a full size Venetian mask on a white wall.

The electronic shutter has a sync speed of 1/60s according to the manual. This is confirmed during my experiments, the maximum usable shutter speed is 1/60s regardless of which flash I have used so far, going above that will result in a black band.

With the shutter speed set to 1/60s the camera captures the full image area.

Already at 1/80s, which is only 1/3 stop above the specified flash sync speed there is a visible black band at the top of the image.

The black band is growing rapidly as the shutter speed is increased. This image is taken with 1/100s shutter speed.

At 1/125s almost half the image is covered by the black band.


The mechanical shutter is in many ways better when a flash is used. One reason is that the specified sync speed is much higher than with electronic shutter. This is possible because the shutter movement is much faster than the electronic shutter is capable of emulating so the shutter blades can expose the full image sensor area at higher shutter speeds.

This is taken at 1/250s shutter speed, which is the documented maximum shutter speed with flash, also called the flash sync speed.

This image is taken at 1/320s shutter speed. The camera still manages to handle the flash, the shutter is fully open at this speed. No shading, or black band is caused by the shutter blades.

This image is taken at 1/400s shutter speed and still no shading, a fully usable image.

Shading starts at 1/500s. With the mechanical shutter the shading is from the bottom up and the band does not have as clear edge as with the electronic shutter. This is because there is a distance between the actual shutter blades and the image sensor and this is normal for mechanical shutters.

Shutter speed: 1/640s and the shading is now significant.

Shutter speed: 1/800s. ...and so on, until at 1/2500s almost nothing is visible, except a very narrow part of the image. After that the flash fires too late and only a black image is taken.

The Nikon 1 V1 can be used only up to 1/60s shutter speeds with the electronic shutter, just like it is specified in the manual. With the mechanical shutter, even though the manual specifies 1/250s shutter speed as maximum, in reality we can use even 1/400s without any negative effects.

Please note that the above conclusion is only valid for my flashes and my camera. I don't know if every camera or even the Nikon V2 and the Nikon V3 behaves similarly, or if this is valid with every other usable flash. I tested with the Olympus T32, the Osram VS280 Studio, Metz 30BCT4 and Sunpak Auto zoom 3000 flashes.

Please note also that the above is only valid through direct connection. With a radio trigger the trigger sets the limit as well and my radio trigger works only up to 1/250s, above that speed there will always be shading. 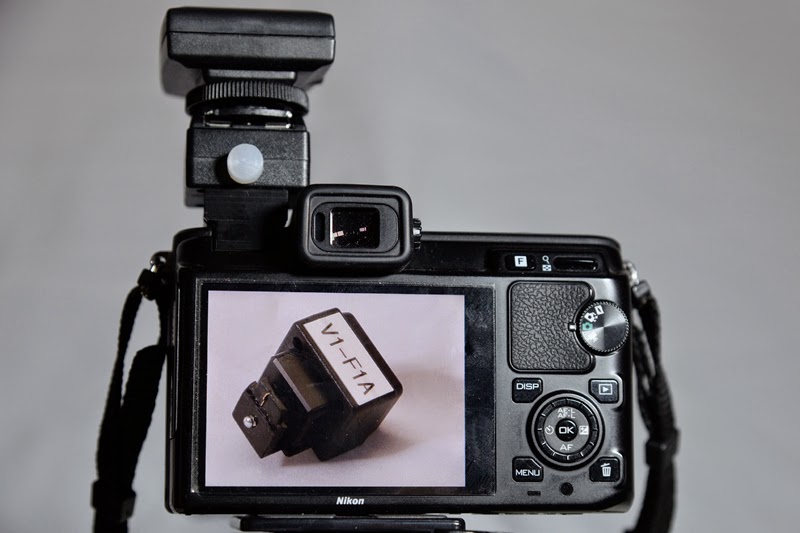 If you are interested in buying the V1F1A flash adapter or want to know more about it, please follow the link below.