Making a pen holder for my CNC

This post is about how to make a pen holder. It took me about one hour to figure out how to make it and to actually make it, so it is really simple if you have the material and the tools. Click on the images if you want to see them larger. 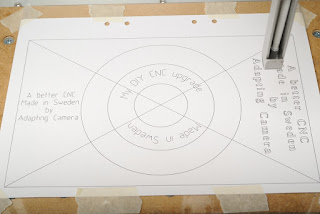 My CNC upgrade project is progressing quite well. All axes are now up and running, most of the mechanical upgrade works are done, so it is time for a test ride. I didn't immediately wanted to start with milling just to test accuracy, so I decided to use the good old cheap and very clean pen method, which simply means that instead of milling real material place a pen on the Z and use that, not the spindle motor. Basically, this converts the CNC into an old flat bed plotter, except that it can't read HPGL files, which is the most common file type for plotters.

I created a G-code pattern manually and tried it out with an ordinary permanent marker pen. Of course, the results were not so pleasing. Not because there was anything wrong with my CNC, but it isn't really possible to use a pen instead of a spindle, at least not this way, by simply fixing the pen on the spindle holder.


The paper to draw on was on the spoil board, which is MDF, not the very best surface for the purpose, especially since it has been used on my CNC version 1, so it had some marks on already. Also the ink in the pen made the paper soft, the paper expanded under the pen, got soaked and became soft as soon as the pen was lowered if the pen was not moving. Finding the Z zero was also tricky, and by the time I was happy with the Z zero position, the tip of the pen was no longer thin enough to be able to measure any accuracy.


I needed a proper pen holder, one which allows constant pressure but in a flexible way, like when we, humans, are using a pen. I didn't want to buy something so simple, so I decided to make one. The principles of mechanism for a plotter pen holder is pretty simple. You need a pen, something to install the pen in and a spring which allows to apply pressure but without pushing the pen into the paper and the table beneath and without breaking the tip of the pen.

Click on the image for a closer look if you decide to copy my design.

Finding a pen was easy. Just look for a good enough ball point refill, one which can be used at high speeds without leaving stain or interruption in the lines. I decided to use a pop rivet to actually push the pen down with the help of a small, short coil spring. The spring which was in the pen was of no use, I needed the type with two ears.

Next step was the actual design of the holder. I decided to use 15x15 mm U profile. Marked all the places for wholes, the cut and the bend and that's it. Simple, but very functional.

The reason why it is so long is that I wanted to be able to use it even if I'd have a tool in the spindle, without the need of removing the tool. This makes it useful even in the future, after I am ready with the initial tests.

It was time to go out to my tiny work shop to cut, drill and bend, in other words, to actually make the pen holder.

I was a bit too eager to get it done and to get started with my CNC tests, so I did not do a very nice work concerning cutting and bending. Never the less, it is good enough for the purpose.

The pop rivet is cut to about half the length to be able to easily remove, or change the pen any time I'd like to do so. Maybe I want to change colour or use a different pen... you never know. With the shorter pop rivet it is easy to do that, without the need of a screw driver.

Time for a final assembly. A short aluminium tube is going to be used for preventing the pen to fall through the hole when the pen is lifted up.I decided not to use that exclusive Parker but went for a cheap plastic copy instead. The drawback of that decision is that the hole where the tip is going through is a bit too large, but that doesn't really matter for the moment.

It looks pretty neat on the spindle holder. After installation I placed a sheet of acrylic glass on the waste board and fixed a sheet of paper on top of it. The work origins were set up manually, setting Z zero was no longer an issue since the pen had a spring, so it was flexible. I lowered about 2mm below the paper surface to give enough pressure and quickly tested just by manually driving X and Y across the table at maximum speed, which is for now 1500 mm/min, and was very happy. So I replaced the paper sheet with a fresh one, loaded the G-code for my test pattern and started the program.

I must say that I am very pleased with the results.

After the first run, I removed the paper sheet to check the angles and all the dimensions with a caliper and a protractor. This is not the most accurate method but good enough to give me a clue if I would have some serious problems. The 90 degree angles read 90 degrees, circles were exactly as I designed, 50, 100 and 150 mm in diameter, checked from various angles, and the writing looked very good as well.

I replaced the paper sheet once again and run the same G-code four times to see how repeatability is and what difference would be visible after that. Practically no difference at all, except that the print which was run four times looked stronger due to the fact that all the lines were drawn four times, which is normal. So I am very happy with the results and will test mill as soon as I have time for doing it.


Feel free to use my idea of this simple pen holder. It will serve me well in the future, even for testing G-code of the objects I plan to make with my CNC.

Finally, I finished editing the video and published it tonight. Have a look and enjoy.