The protective diode inside the V2-F1A

There is a protective diode inside the V2-F1A flash adapter. It's task is to protect the camera in case a user tries to attach a flash with high trigger voltage.

Can this diode cause a problem? Yes, in theory it can, but in reality it is very unlikely. Each individual adapter is made and assembled by myself. They are tested also by myself several times during the process of making and assembling, before they end up in the envelop for shipping.


If the diode would be installed reversed because of a mistake then the tests would fail and no flash would be triggered on my desk, so the probability that a diode is reversed in a delivered adapter is zero, no question about that.


If the soldering would for some reason loosen then the diode would get disconnected. In this case, the protection is no longer active as protection, but the adapter would work just fine, as long as the user is not connecting  a flash with high trigger voltage. If a flash with high trigger voltage would be connected to the adapter then the camera could get damaged without the diode, but a normal flash, made for digital cameras, would still work.


If the diode is fully functional and a user would connect a flash with high trigger voltage than the diode would protect the camera from getting damaged but the flash would not fire. There is a slight possibility that the diode would get damaged in this case, even if my experience shows otherwise. When I experimented with the diode and a high voltage flash it never got damaged.

These experiments are documented on my blog in this post:

Note that I do not test each adapter with a high voltage flash because of the obvious risks of causing damage to the adapter or the flash. The above tests were only made as an experiment because another customer have reported problems, which later on turned out to be caused by the fact that he tried to use a flash which was a high trigger voltage flash.


In theory there is a possibility that a diode gets damaged at one stage, even if this is not likely. 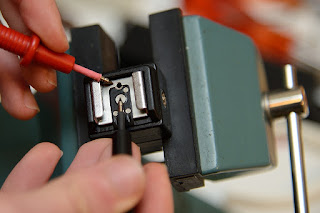 It is easy to test the presence and the condition of the diode. Anyone with some very basic electronic knowledge and a simple multi-meter instrument with a diode measuring option can verify the diode is working or not.

Touch the outer (GND) part of the hot shoe with the positive lead and the centre contact with the negative (common or GND can also be called) lead, like shown in the picture to the left. 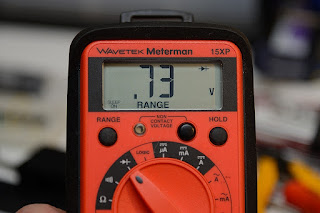 If 0.0V is displayed then there is a short inside the diode and the V2-F1A is no longer working at all. If no voltage is displayed at all during the first measurement then the diode is burned out and the protection is gone. In this case the adapter can still be used and it should work, but the camera is not protected any more against high voltage flash use.


Posted by Adapting Camera
Email ThisBlogThis!Share to TwitterShare to FacebookShare to Pinterest