A few months ago I decided to start an upgrade of my DIY CNC. The target was to keep the same foot print size but increase the stability and the speed, as well as the accuracy. I did not want to build a brand new one from scratch, though looking in the mirror, only the feet and the bottom frame are the same, so basically I built a completely new CNC. Z and X axes were planned to be larger than before, mainly higher, to give me more Z clearance.

Of course, this upgrade had many advantages apart from higher possible speed. Being larger means also more weight and the larger mass gives higher stability. This is definitely positive, since the old CNC had quite a lot of unwanted vibrations and was generally too weak even for milling plastics.

My plans were not just to upgrade the mechanical parts, but also the electrical parts, basically keeping only the stepper motors and the stepper drives, the BOB and the motion controller. This includes new power supply and a VFD controlled spindle as well, in other words, practically a totally new CNC.

To be able to reduce down time as much as possible I had the following workflow for the order of upgrading. 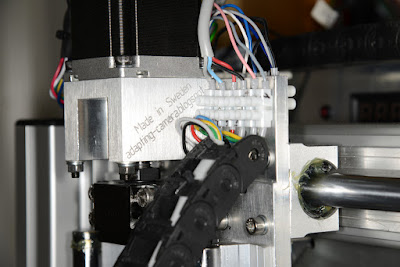 
This was done and ready at the end of 2015. I think that building the Z is the most difficult part, mainly because it is the smallest axis with very little error margins and little possibilities to correct small mistakes. I think that’s why many people buy readily made Z axis to build their CNC around that, instead of designing and building one from scratch, like I did.

There is a short post about that work here:

I was very happy with the results of that work, especially considering the huge speed increase, the jump from 500mm/min to 1500mm/min made a huge difference and gave me a confidence to carry on with the X-beam and was certain that the rest of the mechanical upgrade will be very smooth and well worth the efforts.

Of course, the speed change was easily explained by the screw change. Originally I used an ordinary threaded stainless steel rod with 12mm diameter and 1.75mm thread pitch as lead screw and unsupported 12mm round rods. This was replaced by a 1605 ball screw with matching nut and fully supported 16mm round rods. This means that the screw now is 16mm diameter with 5mm pitch, which is 2.86 times more than the old one, and that is almost the same as the speed increase from 500 to 1500mm/min.

Also additional benefits came from the use of ball nut, which slides much better than the DIY Delrin nut I used previously, but since I still used the original 24V switching supply as stepper power supply, it seems that this was the maximum possible speed for this machine until the power supply is replaced.

The new Z axis is also considerably larger than the old one. I made it to suit a high speed brush-less spindle, not just the small DC motor I used in my first CNC. Of course, it is also much heavier, which is an advantage because it makes the machine more stable and results in less vibration.

Next step was to build a new X axis to carry the new Z. After my first version of CNC was finished I realized that the Z clearance is not enough in the long run, so now it was time to correct this design flaw and build the second version with better clearance and more stability. The new beam is much higher than my original X-beam, allowing about twice the Z clearance I had before, which I think is going to be enough for my needs.

Building the new X-beam was not that exciting, even if it took some time to do it. It is made out of 45x90 and 30x60 extruded aluminum profiles. Pretty simple, straight forward design, fairly easy to adjust and align to get the machine squared.

Once the new X-beam was ready I installed the Z on it and tested on my desk. After aligning the Z to the X and once I was ready with my tests it was time to remove the old beam and replace it with the new one. This was really easy thing to do, due to the original design, and my CNC was fully usable during the whole process except for about the 2-3 hours I needed to remove the old gantry and replace it with the new, including the necessary wiring and squaring, so I was pretty happy so far.

Of course, at this stage I still had the old and slow Y axis with the table, but I could at least use the CNC in case I needed it.

This was the easiest part. The table is just a 15mm thick aluminum plate, with 15mm thick T-slot bed on top of that to allow fixtures and / or spoil board installation. I have also decided to build an acrylic glass frame around to prevent chips flying out of the table area. This slides in under the X-beam, so the height is limited, but it provides enough protection to prevent the chips from falling in under the bed and onto the ball screw or the horizontal linear guides under the table.

Installing the new table in the CNC frame was also very easy. Even in this case, it took less than 3 hours and basically after this installation the mechanical upgrade was done.


For personal safety, I also have a much higher acrylic glass frame around the whole CNC. I had this also before in my original design also, and in my opinion this is absolutely necessary. In case a tool breaks and the cutter flies off like a projectile it stops the tool from causing damage. It happened more than once that I made a mistake and heard the snapping and the loud bang when the end mill hit the acrylic wall, preventing this “projectile” from hitting me or somebody or something else in the room. I guess this is even more important with the high speed spindle and the stronger, faster CNC than it was before. Remember, safety first…

Some technical data of my current CNC

Material used (mainly, but not a complete list): 45x90 and 30x60 aluminum extruded profiles, 10mm, 12mm and 15mm thick aluminum plates, hundreds of stainless steel screws, T-slot nuts and bolts mainly in 5, 6 and 8mm diameters. Total weight is approximately 80kg, including wiring, motors and all the electronics and power supply. CNC fixed to its own feet with four lockable rubber wheels for ease of moving around.


These steps will be described more in detail separately, this is just a list of what is coming.


This is already finished and working. In a few words I can say that it is providing unregulated 44VDC to the stepper drivers. It is an analogue power supply based on a toroidal transformer. This new PSU allows me to increase the maximum speed to 5500mm/min, so it is a huge step forward.

Also in the box is a separate 12V and 5V supplies, these are regulated and will be used for the electronics in the control box.

New spindle and a VFD

I bought a Bosch Rexroth EFC 5610 VFD from a UK company and a cheap Chinese air cooled 1.5kW high speed spindle with ER11 collet from an eBay dealer. It is tested and working but not yet installed. The VFD and the spindle will be controlled via RS485 and Modbus, using the functions provided in Mach3. I think this is a much better and safer solution than using digital outputs and 0-10V. Of course, the new spindle means some modification of the Z axis, but it will be worth the efforts.


Thank you for now, stay tuned, I’ll be back.
Posted by Adapting Camera
Email ThisBlogThis!Share to TwitterShare to FacebookShare to Pinterest