I am busy upgrading my CNC, basically it is a complete rework with mechanics and electronics changed, redesigned or changed, and even the spindle is going to be replaced. Details about the mechanical upgrade are here:

Feel free to read and comment. Other posts will follow, but in the meantime here is one about a small disaster, which actually could have been a major problem and could have caused serious damage if it would have happened at a later stage.

I finished the mechanical upgrade by making a nice new Z plate during the weekend. This was necessary to make, to be able to install the three phase brush-less spindle motor which is going to replace the old DC motor I used so far.

I was busy installing the spindle motor when I noticed that the screw to slightly expand the motor bracket to be able to push the motor into it was suddenly far too easy to turn, like if I was screwing it into a block of butter. Initially I thought that the thread was worn out, but then I saw the cause. A hair thin, fine line across the motor bracket gave the immediate answer to the softness, the bracket was cracked and split in two pieces. 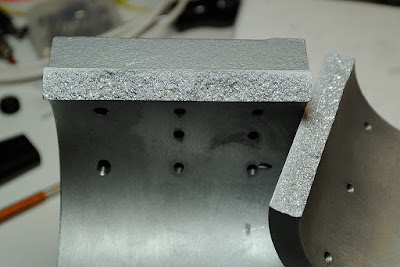 The crack shows that the bracket is really bad quality. It is cast aluminum, but the work is really poorly done, the material is very porous and spongy, providing practically zero flexibility, probably due to the poor material quality, or bad heating, or too low pressure during the casting process. I am not an expert in casting, but the cast aluminum sheets I normally use are much harder, stronger and definitely not look like this when cut, or drilled.

I bought a new one immediately, but this sets me back by about two weeks due to delivery time. Will take a chance of buying a similar one, but not from the same seller. Hopefully the new one will be  a bit better but if not then I'll have to find a different one and make some changes to my new Z plate.

One can say that I was still lucky because it could have been cracked during use, in which case the spindle motor would have fallen to the mill table, causing all sorts of possible damage, especially if it would have been spinning at the time of disaster.

I will modify my Z plate and make this broken motor bracket into a safety holder. In case the main bracket will crack during use this will prevent the spindle motor from falling down on the table, and possibly on my hand if I would be busy changing tool or would for some other reason have my hand under it. The weight of the spindle alone is enough, even if not spinning, to push a cutter right through my hand, especially since most of the time I am using very small cutters, mostly below 2mm diameter, and also a lot of V-bits. It would create a nasty mess and I would not like to get those pushed through my hand, and I figure if I have a safety holder then the risks are really minimal.